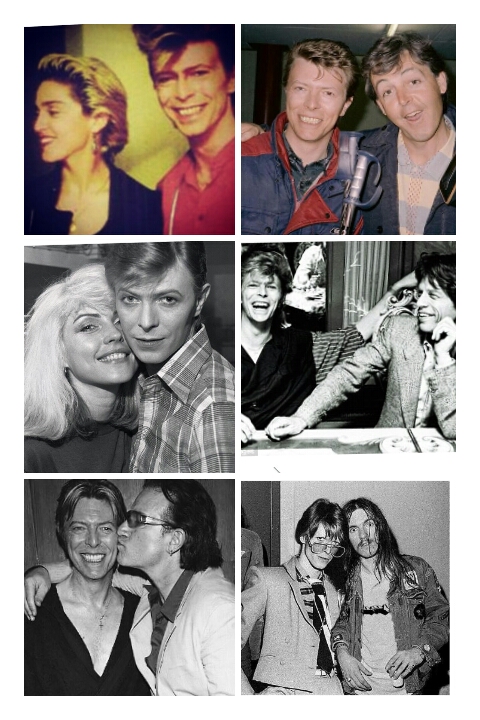 Artist, visionary, actor (Andy Warhol in Basquiat, Nicola Tesla in “the Prestige“, genius casting), songwriter, musician, innovator, conceptualist. A man who needs no further introduction. An artist so in control over his own work, in every detail, releasing his last album on his birthday, what a gift, just two days before his death. I could not watch his latest video’s, somehow they had such darkness in them, and so it turned out the way it did. “Where the fuck did Monday go?”- as he sings this in “Girl Loves Me“, a haunted, beautiful song of his last album “Black Star“. One Monday I won’t forget. I am not a journalist, music critic or any of those people who draw attention to themselves while talking about their hero. I have never met him, though I realize his influence has been present my whole life, whether I was aware of that or not, he always fascinated me. I think the first time I ever noticed him was when he played in the movie “Labyrinth“, from 1986 by Jim Henson, as I saw it was the same guy who appeared in music videos I liked to watch. My parents played his music, my dad had typical 80’s shiny suits and my uncle still wears eccentric (what I like to call) David Bowie-shoes.

When I was 20, Bowie performed in Amsterdam, at Paradiso (june 1997). I had no ticket, so I went there in the afternoon to see i I could buy one, with little money I had left, instead of buying food for the whole week, I figured I could eat bread and go to the concert. Luckily for me, a friend of my father was there too, scouting for a ticket. He bought the most expensive one and than few minutes later, handed it out to me. So I could go and check it out. It was at the time of “Earthling” and the drum ‘ n bass era. The room was packed and there where all these incredible visuals, his video’s at that time created together with visual artist Tony Oursler, amazed me a lot. Few reasons why I wanted to go to art school, I could see so much beauty in Bowie’s videos. The combination of everything he put together with such care.

I was inspired by Peaches her photo, so I took this, turned out pretty well.

As soon as Bowie entered the stage and welcomed the audience, everyone was silent, few people where soflty whispering, “Ooh his voice, that voice!!”. He made few jokes, which I can’t remember, he was incredibly funny, typically that English sense of humor I love so much. Most people I know love his music, everyone has a favorite song, album. I have many but I have to say “Let’s Dance“, is one very close to me. Also is is the last track played by 2 Many Djs, when they close off the night. Radio Soulwax created a masterpiece “DAVE“,in 2012, which is the most lovely, dedicated homage to an artist ever, in audio and visual way. Everything is carefully designed in one full hour of including a soundtrack with original music by the master himself and model Hannelore Knuts as Dave. I asked her what Bowie’s thoughts were on this (through social media), she replied to me: “It was a great honor to be him for a whie. When we released it we got news of his entourage that he liked the mix, movie and me #grateful.”
Looking at it now, it becomes even a greater tribute to one hell of a STARMAN, or “rock god”, as he joked about here with Ricky Gervais.